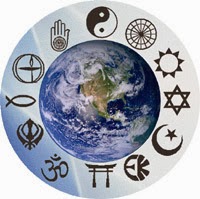 Within all states of being it is being true to others that most defines you. It is that moment when we decide on pushing our thoughts on others, that our realities get skewed on opinions that matter to us, and not those who might share different understandings. Hi I'm Regan, you might remember me from such posts Let Us Be Crazy and Memories Of Floating Balloons, or you might remember me for my crazy ranting and mixed blogs that often don't make much sense but in some alternate reality it makes all the sense in the world. I am here today to talk about humanity. Not individual fronts that we take the stupidity of one, and use it to define a group of people, but humanity as a whole, a construct of a global village made to attack itself because we are weaker when we are blinded by rage, and not the people who are pulling our strings.

See when we let one set of values define a culture or people, we tend to imprison those whose values does not mingle with ours. Like letting one book decide the fate of another, or when laws are built to oppress one because they do not meet the criteria of of those making the rules. We have things like pride that separate one group from another or sexes to exclude those who do not share organs that all of us didn't have a choice to have. I guess what i am talking about is Unity.

When I speak of unity I am not speaking for one group of people, that has nothing to do with it. I am speaking about unity of all and the chance to forgive our past mistakes and step forward to achieve a better world where we can work through our differences and accept that we all don't share in the same values and beliefs. What is unity? By definition unity is the state of being united or joined as a whole. See we are not talking about state as a country or a nation or territory considered as an organized political community under one government. We are talking about a state of mind. To see that color sex or religion should not hold authority over another, that we all should have unity in a world so diverse in nature. If by example we use this idea as organized political state we will see the destructive behavior that has already been created. Politics and politicians create wars over individuals while the people suffer. Blaming the actions of a few to hamper the freedoms of others. Right now in the Americas we see battles over rights with guns while the same governments are bombing others. Does this make sense? Is telling one group they are not aloud to have something while using the same tools to kill others helping push the cause? Or are they trying to disarm one to impose their own set of rules? I am anti-violence and any tool used to bring another down (Guns, bombs, starvation, prison or religion) are excuses to reign authority over another. Of coarse this is only an opinion piece and if you have read my stuff before you know that my opinion is just that, an opinion and is not the end all beat all of answers. I know nothing as I am only a leaf in the wind but enough about me... Are we really free? Freedom use to be defined as the power or right to act, speak, or think as one wants without hindrance or restraint. How far we have fallen on freedom. Are we able to speak? Yes but we have hindrance, we have reactions to what we speak, just ask Edward Snowden on the consequences of trying to speak out. Are we aloud to speak hate against one group or another? I guess that depends on what society or the media accepts as hate. We see it everyday when one religion is used as a definition of terrorist, when not everyone following that said religion follows the practices of harming another. We see it when we speak out about bullying, while the media in the same breath speaks bad about another. If you think you are losing the right to spread hate to another then you are only seeing your own values and not the fact that your hate is infringing on another persons freedom. If your freedom is being denied because you want to use racism as a stepping stone to get your point across, then you are nothing more then an oppressor and have no right to freedom if you believe it should be used to take another persons freedom away. We all need freedom. To live a life of unity where one opinion is not the golden path, since all of our paths are different. 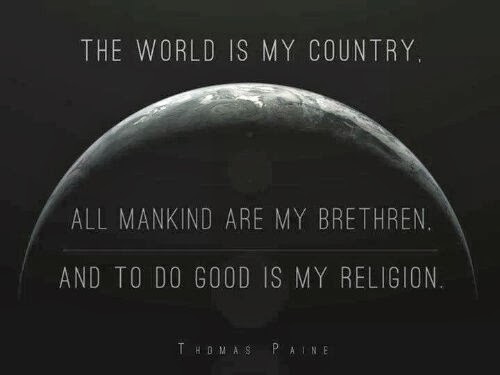 The world is my country, I agree with this. These lines constructed by those to separate us are only just lines drawn on paper. We are a planet and not a map. You can't see the lines from up high, you can only look down on one when pride fills the neighbor of another. When we oppress one because of a politics policy of a country that deems itself higher then the rest.

All mankind are my brethren. Yes, you are my family called the human race. We are no different inside, we all share the same breathes, heartaches and sorrow. We are family that hasn't been properly introduced. I am Regan and I am no different then you. We have different paths and are born with different rules but nature didn't decide on those actions. Nature only seeks a balance of life and death. To build and then rebuild as we grow. It does not care what color you are, you were created not by the stripes on our skin but by the evolution to survive. It doesn't understand that one sex is pushed down by another, because all sexes we created the same. It only wants to grow without restraint. To live and survive in a expanding world.

And to do good is my religion. Ah religion the world used to incite anger, oppression and opinions to control another. Myself I don't care what religion you are, or what beliefs you hold. The only thing I care about is if you are doing good to another. To let another grow as you have, so we can all live in a life that has our best interests at heart. To have food, warmth and shelter and to be free to help another obtain these same goals.

My religion is Ominism, the belief that all religions have a certain truth and that even thou there as so many, there are still many other infinite number of possibilities. I do not adhere to one reality or one set of rules. This world is more then one set of values or belief. With all life we are only able to see a part of the story. With religion we are told to believe the beginning of one idea, when in fact we only know the middle of the story. How can we define a multitude of people by only grasping at the middle of a book, or the middle of our history. Religion and science like to define our answers by opinions and what if's, when those what if's tend to change as our stories grow and change with us. We are always changing, and change as scary as it seems for many, is something nature has always done. It is up to us to change for the better, to accept that strengths and faults of another and see that these things should not define a whole people.

If we keep on this path a storm will be coming. One built on profit and fueled by anger against family. Where color and sex will define the rules of engagement, where those who separate us will have control over us because they are the ones fanning the fire of hate for another. All life needs a chance to live, and our world needs a chance to heal itself, as we need a chance to heal each other. be as one with the tree and see how we make up one large story. How we are all connected by this great planet of ours. You keep asking what came first, the chicken or the egg? It was the egg, a big beautiful blue one that for some reason is being destroyed for the gains of now, and not the futures of all living entities tomorrow. Let peace reign my family.